Introducing Charity & Chris… Read all about their awesome love story that all started on the basketball court at SFA! We can’t wait for these two to say “I Do” on March 21, 2021!!

How did you and Chris meet?

Christopher and I met as students at a Stephen F. Austin basketball game. I was a cheerleader and he was working on his internship with athletics. I just so happened to place my water bottle behind the chair he was working from; so, every time I needed a drink I had to make small talk with him. (I mean he was the cute boy in the corner, who always caught my eye with his perfect fitting khaki pants… How could I pass up an opportunity like that!) I had made sure that would be my designated spot to put my water all season long. Throughout the season the small talk turned into conversation and eventually flirty comments. One moment that I will never forget is when I got hit in the face with a basketball DURING the game. I had been so embarrassed, I started to cry. Not only did the whole stadium see the ball hit my face but the one person I didn’t want to see, Christopher, had a front row seat!! I then remembered… my dang water bottle was behind his chair. So, I had no choice but to walk over where he was. He had already grabbed my water from behind his chair to have ready for me. I remember seeing him waiting there, with his sympathetic grin, a grin that made me feel safe and no longer afraid if he saw me cry. I told him the reason I was crying was from embarrassment and that the basketball did not hurt. I went on to say that I was worried all my crying had messed up my makeup. He gave me that same grin and with such a gentleman-like tone said, “You look great”. I will forever keep that memory, it was the most genuine compliment I had ever received. That had been one of the last basketball games before we went on break. Over Christmas break we did not keep up with each other. When the semester started back up we were surprised to find ourselves in the same business class. This is how it happened…

The Second Epic Meeting: Christopher was on his way to Mrs. “Cathy” Henderson’s, Spring 2018 Management class on the first day of the semester. He was running behind schedule and walked into an already full classroom. He had a decision to make. He could have chosen the seat in the back on the other side of the classroom OR he could sit by the cute blonde on the front row. Of course, he chose the cute blonde. When he first walked up, we did not recognize each other, and he asked if the seat was taken. I looked up and we instantly caught each other’s eyes! He then said, and I quote “Oh Sh** it’s you!”. I giggled and had told him this seat was open. It did not take us long to get each other’s number. Christopher was really smooth and told me he wanted my number, so I could remind him to do his homework. Come to find out, he is actually a very organized student. Later in the semester we had to pick a group for our final project. We of course chose each other and then two other classmates. When we had to meet up for the group project, I really started to see Chris’s leadershippersonality shine through. I had a weird feeling letting him take over when usually I was the leader. Skip to the end of the semester, our project took first place and won the cash prize. Our relationship continued to blossom that semester. He walked me to class every week from my Hall 20 dorm room. Mrs. Henderson’s class will always be our favorite because it was the beginning of forever. Christopher says he knew when he sat next to me in that class it was “game over”. He was locking me up. 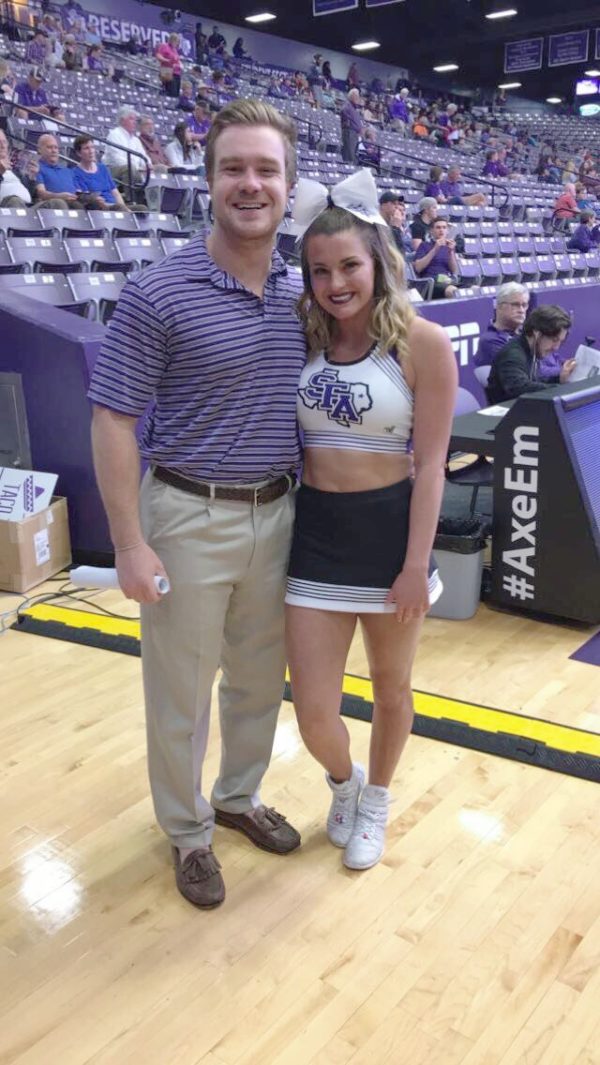 How did Chris Propose?

December 20, 2019, I woke up expecting to spend the day moving out of my college apartment and moving into my new apartment in Houston. Christopher told me before we left to dress cute because we would be getting brunch with his Grandparents when we got to Nacogdoches. I did not realize I needed to dress “proposal cute”. The night before I asked him if I should wash my hair. He said it would be fine because we will be moving tomorrow…LOL. So, I didn’t wash my hair and just wore it in a ponytail, which I was okay with since it was just brunch. I also had not packed anything super stylish (I brought a sweater that I bought a couple days prior at Good Will). I brought it with the intention of it being used for brunch then shoved in a bag afterward. Before we made it to brunch,Chris said he wanted to pick up a commemorative basketball from the coliseum that a friend was holding for him. When we arrived it was 8:30 a.m. I was still waking up and was not mentally ready to be social yet. I tried to get him to leave me in the truck. He persisted that I should come in with him. So,after the third time of asking me to come in, I finally got out of the truck and walked in with him. As we walk in I still had zero idea what the true reason was for us being there. We walkeddown to the court to meet his friend who allegedly had the basketball. We made small talk and then Chris said he wanted to go look at the tunnel that was being built on the other side of the court. I agreed and followed him out to the center. As we got closer to the center of the court he startedto squeeze my hand multiple times. At that moment reality hit me like a bus, the reality that the love of my life was about to ask me to be with him forever. He had tears filling his eyes and that same sweet grin from before. I had known this was coming for a while but had absolutely no idea that day would be today. He pulled me out from the center to where we could read the Jumbo-Tron, it read “Will You Marry Me?” before he even asked I started saying yes, yes, yes! He then pulled me back to the center and got down on one knee. He pulled out the ring case and said, will you marry me? I grasped his face with both my hands and said YES! The ring was the last thing on my mind, but when he opened the box I instantly fell in love. He had picked it out with his family at a local jewelry store in Nacogdoches (the town we met in). The ring fit me so well and represented me perfectly. It was more perfect than any ring I would have ever chosen for myself. We are set to get married on March 21st, 2021! 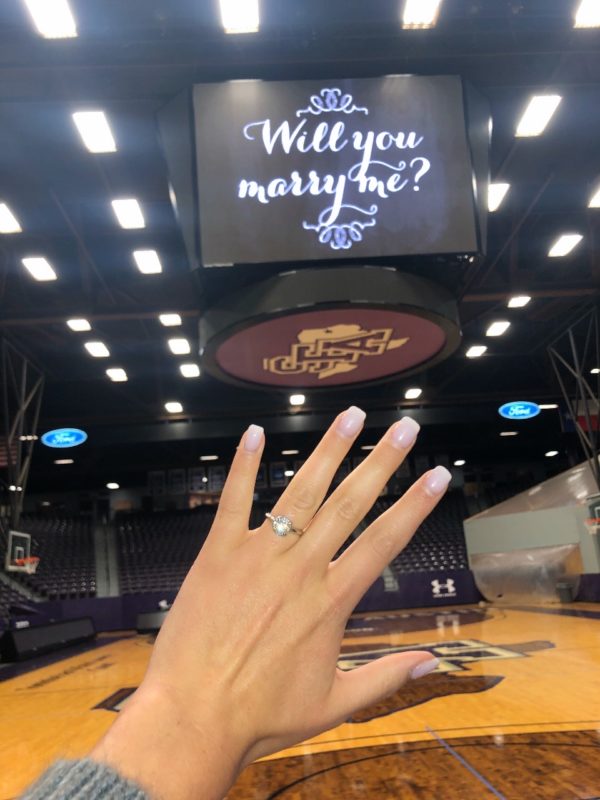 Why did you chose the French Farmhouse Venue!

There are numerous reasons why this venue felt like the most perfect fit for our day. I love the style of the French Farmhouse, it was so easy to envision how immaculate and unique this venue will be once it is complete. The first and most important feature is the wedding tree. I find it so symbolic that the tree we will be married in front of is actually two trees that merged together and became one beautiful tree. (Genesis 2:24) My next favorite is the bridal suite, it faces outward to where I will be able to watch all of our loved ones arrive to celebrate our union. I love that the wall of windows will have a large door from France that has been beautifully carved and crafted with the depiction of a 3-ring cord. (Ecclesiastes 4:12) This will be the perfect backdrop for our head table. The table will be facing all of our guests and we can sit back and enjoy OUR party. There is so much more that I adore about this venue. Kelsey did such a great job at helping me envision their vision. I feel they will make each wedding uniquely special for every couple. This will be the most perfect venue to celebrate such a wonderful occasion. 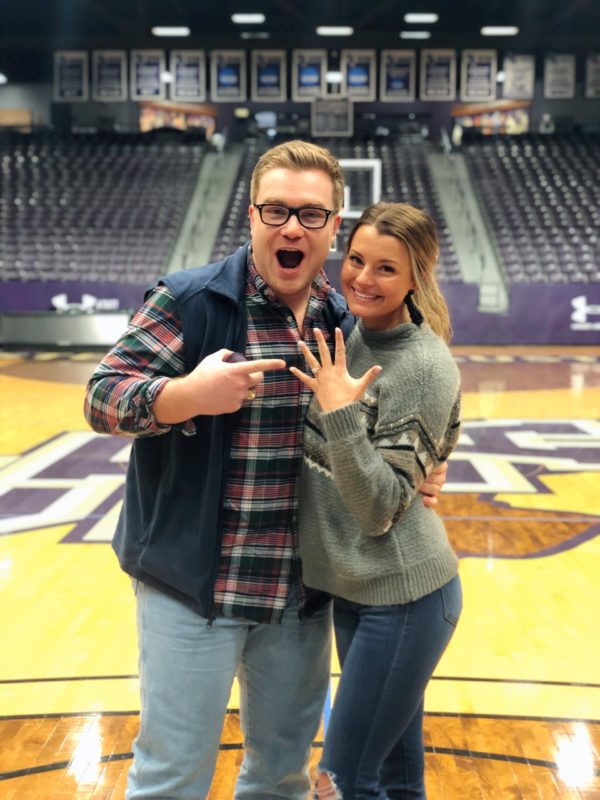 “Though one may be overpowered, two can defend themselves. A cord of three strands is not quickly broken.” Ecclesiastes 4:12